Twenty percent of deaths globally are caused by toxic foods, processed foods, junk foods, and harmful food ingredients, according to a new scientific study on diet and global diseases. The bigger implication here is that the toxic food industry ranks up there and is as dangerous and detrimental to health compared to Smoking and Air Pollution.

The new study directed by the Institute of Health Metrics and Evaluation (IHME) at the University of Washington, and published in The Lancet medical journal, discovered that an astounding 20% of global deaths are attributed to all these toxic, junk, and other harmful foods and ingredients. When they tallied all of the “causes or reasons” of people’s deaths globally, DIET or a poor diet comes up as the 2nd most cited reason following high systolic blood pressure.

The study does confirm already what we know for a long time – that DIET actually affects our body’s short-term and long-term health. This is basically the main reason why I focus and impresses upon people the importance of diet. For instance, my protocols in treating different kinds of cancer emphasizes on the consumption of pesticide- and herbicide-free vegetables and fruits. This is due to our long-term knowledge that disease usually starts from toxic and processed ingredients in junk and fast foods.

Even our fresh produce can already be called a “killer” since a lot of them are sprayed with glyphosate and pesticides, and grown genetically engineered to be free of pests but detrimental to human health. The saddening thing about these is whereas tobacco is highly regulated even by the Philippine government, it is the processed food that we eat which have limited enforced regulations on containing dangerous and toxic chemical ingredients. 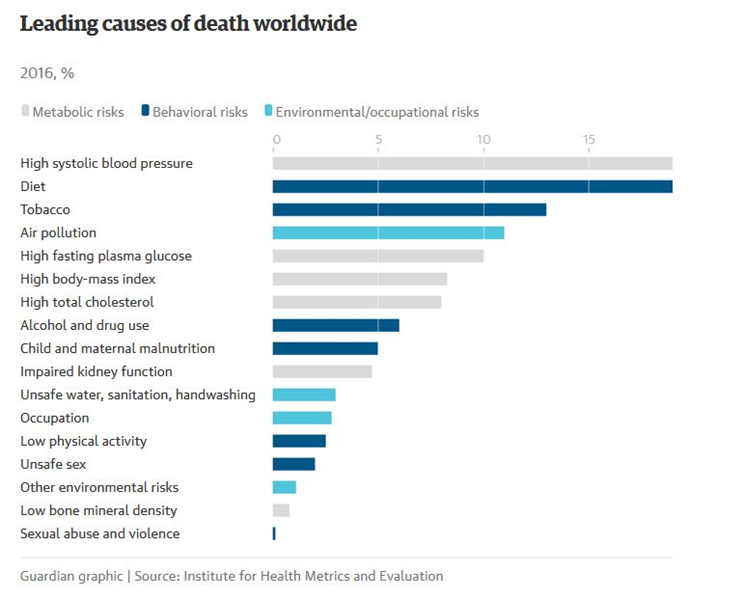 Data Source: The Guardian citing info from the Institute for Health Metrics and Evaluation

The problem right now is the high incidence of cancers and cardiovascular diseases are often attributed to the spread and popularity of Western diets, such as eating fast foods instead of the traditional foods we used to consume. In my grandmother’s time, people ate a lot of coconut-based dishes and fruits and vegetables. Now, people would rather have a burger at McDonald’s and Jollibee – both outlets sell highly-processed foods.